Israel puts its money on settlements not peace talks

The editorial from Ha’aretz is followed by news reports from Reuters, the Financial Times and Ma’an news. 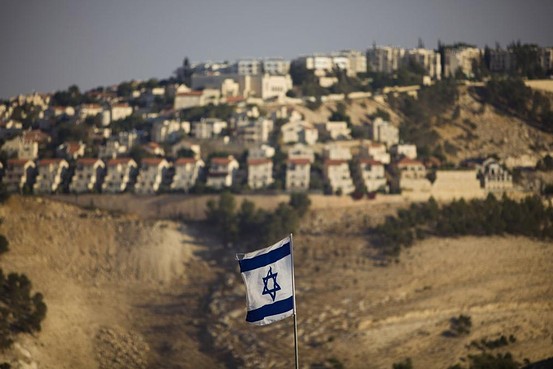 An Israeli flag planted in front of the illegal settlement of Maaleh Adumim on the outskirts of Jerusalem. Photo by AP.

The government will do anything it can to sabotage the talks with the Palestinians. There is no other way to interpret the recent approval of 878 new housing units in secluded West Bank settlements.

The government will do anything it can to sabotage the talks with the Palestinians. There is no other way to interpret the Civil Administration’s endorsement of plans to build 878 new housing units in secluded West Bank settlements. The government will also forge ahead with creating facts on the ground, just in case the talks get under way. The addition of 91 settlements to Israel’s national priority areas attests to this.

Saeb Erekat, head of the Palestinian negotiation team, has warned that the construction in the West Bank jeopardizes the direct negotiations scheduled to open in Jerusalem on Wednesday. Meanwhile, a State Department spokeswoman has said the United states does not accept the legitimacy of continued Israeli settlement activity and opposes any effort to legalize outposts.

But the Israeli government is not impressed. It sees itself as a victim of diplomatic rape intended to end the dream of a Greater Land of Israel. The government is determined to battle anyone seeking to thwart this dream.

If there’s any need for further proof of the government’s derangement, it’s the decision not to sign the scientific cooperation agreement with the European Union as long as the agreement is restricted to the 1967 borders. Israel is the only country outside the European Union that was invited to join, but what’s NIS 1.5 billion – the sum Israel will lose if it doesn’t sign? And what does the government care if vital research fields are crippled as long as the delusion of the Greater Land of Israel is protected?

The cabinet members are not the only partners to these dangerous decisions. The opposition, whose voice has not been heard, is also a partner, legitimizing these decisions by its very silence. The silence of the academic community and research institutions is also inexplicable; after all, they know how to raise a hue and cry against slashes in research budgets or wages.

“We want to find a creative solution that lets Israel sign the agreement,” an official who attended an urgent meeting called by the prime minister told Haaretz.

But there is no creative solution, wink or bluff that can prevent the tightening closure on Israel. It seems the settlements will continue to determine Israel’s future.

Israel this week gave preliminary approval for 800 new settler homes in the occupied West Bank, put on the market plots for 1,200 more and were set to lay the cornerstone for a new settlement neighbourhood consisting of scores of homes in occupied East Jerusalem.

Speaking to Reuters at his office in the desert city of Jericho, near the border with Jordan, Erekat expressed optimism that renewed talks with Israel would continue but warned that Palestinian patience with the settlements was limited.

“If the Israeli government believes that every week they’re going to cross a red line by settlement activity, if they go with this behaviour, what they’re advertising is the unsustainability of the negotiations,” he added.

After six rounds of shuttle diplomacy, U.S. Secretary of State John Kerry coaxed Erekat and his Israeli counterpart Tzipi Livni into their first official talks in Washington last month after a three-year hiatus caused by disputes over settlements.

Around half a million Israeli settlers live in East Jerusalem and the West Bank, land captured by Israel in the 1967 Six Day War which Palestinians want as part of a future state.

The settlers and the Israeli prime minister’s right-wing base are reluctant to quit the land where they cite Biblical and historical roots, but Palestinians say the settlements end the last chance for a viable state of Palestine.

Erekat said that despite the new settlement plans, the Palestinian side was willing to negotiate with their Israeli counterparts for the full period agreed upon with Washington.

“We are determined to give this effort of six to nine months every chance it deserves … it’s time for the Israeli government to choose negotiations and show good faith,” he said.

The talks have had a shaky start, as Erekat and Netanyahu both submitted letters to Kerry on Saturday complaining that the other side’s actions harmed progress.

Erekat cited settlements while Netanyahu accused the Palestinians of “incitement” and “hate education” after Mahmoud Abbas said last month that he wanted no Israeli soldiers or civilians to live in a future Palestine.

Erekat welcomed Israel’s decision to release 104 Arab prisoners in four phases, with the first 26 expected to be freed on Tuesday.

But the move satisfies only one of the three prerequisites Palestinians had advocated to revive the talks during Kerry’s six rounds of shuttle diplomacy in the region this year.

A full settlement freeze and an acknowledgment of the 1967 lines as the basis for future borders – the other two Palestinian demands – appear to have dropped from officials’ public statements.

Israel has publicly ruled out any preliminary deals on borders and settlements, calling them preconditions on issues that must be agreed at the end, not the start, of negotiations.

Speaking to reporters in Cairo last month, Palestinian President Mahmoud Abbas said talks would focus first on borders and security, which would appear to address their old demands.

“It’s time for decisions, not negotiations,” Erekat said, “and I hope Palestinians and Israelis will be able to make the decisions required to reach a comprehensive agreement on all core issues without exception, meaning Jerusalem, borders, settlements, refugees, water and security.”

JERUSALEM–Israel has issued tenders for the construction of nearly 1,200 new housing units in occupied east Jerusalem and the West Bank, defying US and Palestinian opposition to expansion of Jewish settlements three days before the scheduled start of peace talks.

The announcement on Sunday came as an Israeli ministerial committee began meeting to authorise the release of 26 long-serving Palestinian prisoners, a goodwill gesture agreed by Benjamin Netanyahu’s government as a confidence-building measure for the talks, which has been unpopular with many Israelis.
More

Israel’s housing ministry said that 793 or about three-quarters of the new housing units would be built in neighbourhoods of east Jerusalem, where the Palestinians want to establish the capital of a future state. Another 394 are due to be built in large settlement blocs in the West Bank that Israel wants to hold on to if a peace deal with the Palestinians is ever reached.

“The Israeli government is working to reduce the cost of living in all parts of Israel,” Uri Ariel, housing minister and a member of the pro-settler, extreme rightwing Jewish Home party was quoted by Israel’s Ynet news agency as saying. “No country receives orders about where it can and cannot build from other countries.”

Mr Netanyahu’s rightwing coalition government has rejected calls by the international community and the Palestinians to freeze settlement construction, the issue that caused the last round of peace talks in 2010 to collapse. The European Union’s publication of fresh restrictions banning EU funding for Israeli entities behind the Green Line angered Mr Netanyahu’s government, which accused Brussels of interference in its affairs ahead of negotiations with the Palestinians.
On Thursday the US criticised Israel’s continued expansion of settlements, when State Department Jen Psaki said: “We do not accept the legitimacy of continued settlement activity and oppose any efforts to legitimise settlement outposts.”
Saeb Erekat, the Palestinians’ chief negotiator, last week accused Israel of seeking to sabotage efforts to negotiate a two-state solution. “Settlement construction shows a lack of seriousness towards the idea of Palestine and Israel living side-by-side in peace and security,” he said.

Some Israeli media on Sunday presented the housing announcement as a tactical move by Mr Netanyahu aimed at placating rightwing opinion, including the Jewish Home party that sits in his coalition as the third-largest party. Haaretz, the liberal daily, said that American and Palestinian officials knew in advance that Israel would make the announcement in conjunction with the prisoner release.

The Palestinian prisoners, the first of 104 Israel has promised to release as part of renewed peace talks, are due to be released by Tuesday if legal appeals fail to overturn the decision. The country’s High Court of Justice is hearing a petition filed against the release by families of some of the victims.

Negotiations between the Israelis and Palestinians, details of which the US is aiming to keep discreet in order to avoid damaging leaks that might provoke either side, are scheduled to resume in Jerusalem on Wednesday. Martin Indyk, the US special envoy for the talks, met with Palestinian President Mahmoud Abbas in Ramallah on Sunday.

Yair Lapid, finance minister and head of the centrist Yesh Atid party said that to publish the tender ahead of the negotiations was “a double mistake”.

“Housing solutions should be implemented in the areas where there is demand for housing, and this is the purpose of the housing cabinet,” Mr Lapid said on Sunday, referring to a government body that he heads. “The use of resources intended for housing the middle class in order to unnecessarily defy the Americans and to put sticks in the spokes of the peace talks is not correct or helpful for the peace process.”

JERUSALEM — Israel is inviting bids to build over 1,000 settler homes in the West Bank, including East Jerusalem, the housing ministry said on Sunday, ahead of peace talks with the Palestinians.

“Tenders will be published” later in the day for 793 units in annexed east Jerusalem and 394 elsewhere in the West Bank, the ministry said in a statement, three days before the next round of talks.

“No country in the world accepts diktats from other countries on where it is allowed to build or not,” he said in the statement.

“We shall continue to market apartments and build throughout the country.”

The statement said that plots were to be offered in Har Homa and Gilo, both on east Jerusalem’s southern outskirts and in Pisgat Zeev, on the city’s northern edge.

Tenders would also be invited for homes in Ariel, in the northern West Bank, in Maale Adumim, East of Jerusalem, and in Efrata and Beitar Ilit, around Bethlehem, it said.

The US State Department said last week that Israeli and Palestinian negotiators would resume talks in Jerusalem on Wednesday on ending their long-standing conflict.

They resumed direct negotiations in Washington last month ending a three-year hiatus after painstaking US mediation.

The last talks in 2010 broke down on the issue of settlement building.

“It is clear that the Israeli government is only interested in illegal settlement building, throwing away American and international efforts to resume negotiations,” he said in a statement.

Lior Amihai, of settlement watchdog Peace Now, said that if negotiations collapsed to a background of Israeli settlement activity, Israel could find itself in a worse situation than it was before talks.

“We need to push and encourage the negotiations,” he said. “It’s a pity that the government chooses to place more obstacles in the way.”

Israeli’s chief negotiator in the talks, Justice Minister Tzipi Livni, was to meet with Defence Minister Moshe Yaalon and Science and Technology Minister Yaakov Peri, a former head of the Shin Bet security agency, later on Sunday to approve a first batch of 26 prisoners to be freed ahead of Wednesday’s talks.

A total of 104 long-term Palestinian and Israeli Arab prisoners, in jail since before the 1993 Oslo peace accords, are to be freed in four stages, depending on progress in the talks.

And the success of previous ‘defiance’: Israel lobs spoiler into peace talks with funds for new settlements