The report from Al Jazeera is followed by tweets from the protest camp as it is dismantled by the police.

At least five of around 50 demonstrators were arrested with the rest put on a bus to PA-controlled areas [Reuters]
Israel has dismantled a tent camp Palestinians set up during US President Barack Obama’s recent visit to protest against Israeli plans to build a large West Bank settlement near Jerusalem.

“The settlers in E-1 will destroy the idea of an independent Palestinian state.”

Palestinian legislator Mustafa Barghouti, one of the organisers, told the AFP news agency by phone on Sunday that he and four others were arrested and taken for questioning at Maale Adumim police station.

Police said they were later released on bail.

Barghouti said about 50 other protesters were put on buses and released in a Palestinian Authority-controlled part of the West Bank.

Activists set up the camp, which they dubbed Bab al-Shams or “Gate of the Sun” in Arabic, near the West Bank Israeli settlement of Maale Adumim, in a bid to draw attention to Israeli plans to boost illegal construction in the area known as E-1.

Tents were pitched on Wednesday to highlight the issue at the start of Obama’s trip to Israel and the Palestinian territories.

During his visit last week, Obama singled out the E-1 settlement as particularly problematic.

Contiguous Palestinian state
The settlement of more 3,500 apartments would close in one of the last open spaces between East Jerusalem and the West Bank, territories the Palestinians want for their state along with the Gaza Strip.

The camp was first set up in January but taken down by court order on the grounds of “public disorder”.

The encampment is part of a new Palestinian tactic to protest against Israeli settlement expansion.

Similar encampments have sprouted elsewhere but have been quickly razed by troops or police.

Palestinians say settlement construction in E-1 would effectively cut the West Bank in two and prevent the creation of a contiguous Palestinian state.

“The settlers in E-1 will destroy the idea of an independent Palestinian state, which will end once the West Bank is cut in two,” Barghouti said.

The international community has reacted with consternation at Israeli plans to build in E-1, urging Prime Minister Binyamin Netanyahu’s government to reconsider.

Israel has built dozens of settlements considered illegal under international law in the West Bank and East Jerusalem since 1967 that are now home to more than half a million Israelis.

In addition, settlers have set up dozens of unauthorised outposts to claim more war-won land.

@iFalasteen
Helicopters, jeeps and bulldozers are overrunning the town of #BabAlshams #AhfadYounes right now.12:25 AM

@iFalasteen
History repeats its self Israeli forces are doing to #AhfadYounis the same thing they did to #BabAlshams few months ago. #Palestine
12:30 AM – 24 Mar 13

Rajai abuKhalil
2 Shavas vehicels and a Bus just passed by. Which means they are planning to arrest every1 inside #AhfadYounes #BabAlshams

Raimo Kangasniemi
#AhfadYounes represents what #EuropeanUNion & #US pretend to want: Non-violent protest. Now it is being destroyed & hey are silent. #America

@iFalasteen
A lot of solders waking up to #AhfadYounes right now backed up with more than 50 occupation vehicles and 2 helicopters. #BabAlshams

Abir Kopty @AbirKopty
100s of Israeli policemen arrived on foot to #ahfadyounis #babalshams, ordered ppl to leave or otherwise they will be arrested

@iFalasteen
Everyone is in the middle of the village refuses to leave and chanting in the Zionist faces ” we won’t leave”. #BabAlshams #AhfadYounis

@iFalasteen
RIGHT NOW: everyone in the village is getting arrested by occupation forces don’t know where thay are going to take them. #BabAlsham 1:03 AM @iFalasteen
All #AhfadYounis residents were detained and taken by Israeli forces, no idea where to, yet. #Babalshams #Apartheid 1:13 AM

From what I heard some of the activists are going to Ofer and some are going to e dropped at kalandya check point. #BabAlshams #AhfadYounes 1:26 AM

Rajai abuKhalilرجائي @Rajaiabukhalil
They have arrested everone now! every1 are in the IOF vehicles and buses, but they haven’t moved yet. #AhfadYounes #BabAlshams 1:20 AM

The IMEU @theIMEU
RT @Rajaiabukhalil: They are evicting #AhfadYounes right now & blocking every1 out. I managed to enter in an Ambulance w/my Dr. ID card 1:45 AM

Rajai abuKhalilرجائي @Rajaiabukhalil
They are taking the arrested activists of #BabAlshams #AhfadYounes next to the village of Aljeep where they will probably release them 2:24 AM 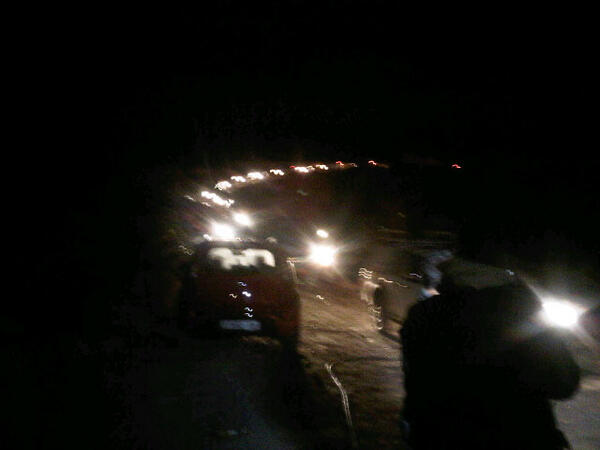 Rajai abuKhalilرجائي @Rajaiabukhalil
thumbs up for @Lemapal who was arrested at #AhfadYounes #BabAlshams ..she was singing and chanting while being arrested and in the IOF bus 4:31 AM 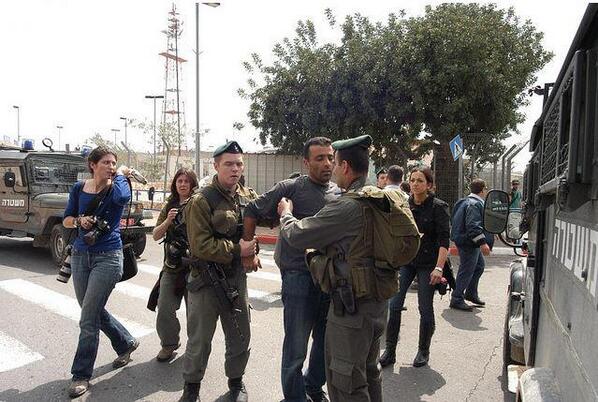