Changing the face of Palestine 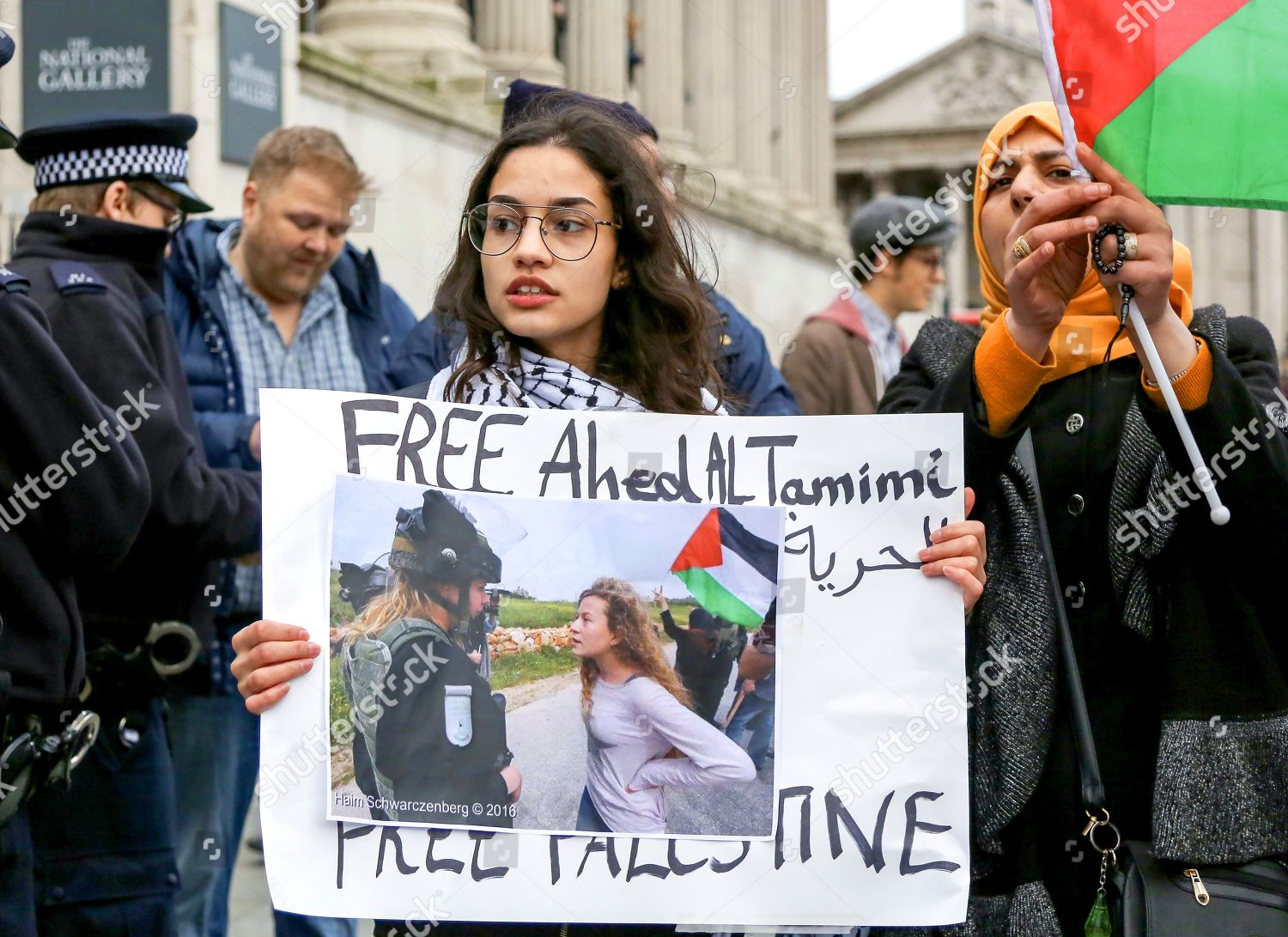 A Symbol of Palestinian Resistance for the Internet Age

Viral videos of the Palestinian teenager Ahed Tamimi confronting Israeli soldiers reveal how the conflict is evolving with technology.

But for all the Palestinian youth who have had run-ins with the Israeli military, few have become as internet famous as Ahed Tamimi. The 16-year-old native of Nabi Saleh, a village in the West Bank, faced a dozen charges from Israeli authorities this week after a video of her slapping and kicking an Israeli soldier stationed outside her home spread across the web.

The video is striking. At first, Ahed (who is standing with her cousin, 20-year-old Nur Tamimi) can be seen pushing two armed soldiers, telling them to “get out” of the area surrounding the family’s home. After one soldier attempts to swat Ahed away with his arm, she responds by kicking and slapping him. The soldier dodges, but doesn’t retaliate. Soon after, Ahed’s mother, Nariman Tamimi, intervenes, urging the soldiers to leave. It was based on this altercation that all three women were charged with assault by Israeli authorities. Nariman Tamimi faces an additional charge of incitement for broadcasting the altercation on Facebook Live. Ahed Tamimi faces a total of 12 charges, including incitement and throwing stones.

The video of the melee garnered widespread attention on both sides of the Green Line. Among Palestinians, Ahed was heralded for standing up to the army. Some who praised her compared her to Malala Yousafzai and Joan of Arc. Bassem Tamimi, Ahed’s father and a veteran activist—who himself was charged by Israeli authorities for organizing protests in 2012—called his daughter “a representative of a new generation of our people, of young freedom fighters” in Israeli newspaper Haaretz, adding: “My daughter has spent her whole life under the heavy shadow of the Israeli prison … her own arrest was just a matter of time. An inevitable tragedy waiting to happen.”

Exactly what kind of symbol Ahed has become is a matter of much debate—and something of a Rorschach test for how people view the larger politics of the region. For Israelis, she is seen as living proof of the army’s restraint. For Palestinians, she appears to have emerged as a national hero representing of a new generation of Palestinian resistance. A young girl known for her long, curly hair isn’t the image one might typically come to expect of a national freedom fighter—a role once reserved for figures like Yasser Arafat, the former Palestinian president, or Marwan Barghouti, who is currently serving multiple life sentences in Israeli prison for murder.

Palestinians join Lebanese for a protest calling for the release of Palestinian teen Ahed Tamimi.  Photo by Anwar Amro / AFP

Unlike these leaders from generations past, Ahed is both young and very much online—recognizable not only to those within Israel and Palestine, but to viewers around the world. Whereas Arafat and Barghouti’s faces are more likely to be seen displayed on Israel’s separation barrier than they are on YouTube, Ahed’s face is more likely to be seen on modern, self-publishing web platforms—which enhances the sense that she’s giving the world a more authentic glimpse into the life of an everyday Palestinian kid, regardless of whether that’s actually the case. It’s a level of online recognition that few other Palestinians can claim, except perhaps Mohammed Assaf, the Gaza native who gained widespread acclaim in 2013 when he won Arab Idol (the Middle Eastern version of American Idol) at the age of 23. It’s also a revealing reminder of what it means to be internet-famous in Palestine. Ahed’s fame isn’t accidental—or, at least, last month’s video wasn’t the first time she had been filmed confronting the Israeli military. She first gained international recognition in 2012 when, as an 11-year-old, she was filmed shaking her fist at a soldier nearly twice her size after the army arrested her older brother—a viral image that earned her an invitation to visit Turkey by then-Prime Minister Recep Tayyip Erdoğan. She gained notoriety once more three years later, when she was filmed slapping and biting a masked soldier trying to apprehend her younger brother.

In a way, last month’s incident was the same story. As the Times of Israel reported, Ahed told an Israeli military court the altercation was sparked by something that had happened only an hour before it took place, when an Israeli soldier shot her cousin, Muhammad Tamimi, in the head with a rubber bullet. “I saw the same soldiers who hit my cousin, this time in front of my house,” she testified. “I could not keep quiet and I responded as I did.”

Ben Ehrenreich, a journalist and author of the The Way to the Spring: Life and Death in Palestine, told me part of what makes Ahed stand out—what has helped turn her into something of a modern phenomenon—has to do with where she comes from. “What is unusual about Nabi Saleh is that they have had these protests and have committed themselves to a path of unarmed resistance against the occupation and have done everything they can to bring international attention to their struggle and to their plight,” Ehrenreich said. “When something happens there, it gets noticed a lot more than if it happened elsewhere.” If the resistance against the occupation was going to produce a symbol for these modern times, it was bound to come from a place steeped in the culture of protest and activism—a place where Palestinian protesters and Israeli military forces, media and activists, would gather week after week. It was also bound to emerge from a family like the Tamimis, whose years-long dedication to organizing and documenting the events in Nabi Saleh have made the village infamous.

But in addition to Ahed’s origins, what makes her particularly distinctive to Israelis and international audiences also has to do with how she looks. “Unavoidably, she is blonde and light-skinned and light-eyed,” Ehrenreich, who profiled the Tamimi family in 2012, said. “A great deal of work goes into ‘othering’ Palestinians, to casting them as some really recognizable other… but when suddenly the kid doesn’t fit into those stereotypes—when she actually looks like a European kid or an American kid—then suddenly all that work of dehumanization can’t function, and she can’t be ‘othered’ in the same way. And then people freak out.” Indeed, Ahed’s appearance has often been a focus by supports and detractors alike. Michael Oren, an Israeli parliamentarian and former ambassador to the U.S., accused Ahed of being paid to dress up in “American clothes” and provoke the soldiers, seemingly suggesting the teen would not be wearing jeans and a T-shirt otherwise. In a recent column fittingly titled “In Nabi Saleh, the Palestinians Aren’t Legally Blonde,” Haaretz columnist Amira Haas noted Israel’s fascination with Tamimi’s blonde locks. Some have taken to calling her “Shirley Temple.”

Of the hundreds of Palestinian youth who have confronted the Israeli army, few have earned nicknames. Even fewer have become national symbols—a hero to some, a threat to others. When I asked Ahed’s lawyer, Gaby Lasky, what fuelled this symbolism, she attributed part of it to the fact that the altercation was caught on camera. “The video in a sense is kind of the essence of the Israeli-Palestinian conflict because it shows the two narratives … both sides see something very different from the same action,” she told me. Lasky said that while she has represented Palestinian youth facing charges similar and more serious than Ahed’s, their cases never garnered the same national attention. “She’s a 16-year-old and that’s something that has to be put on the table, and it seems that the prosecution and the army are not taking this into consideration. They want to use this case to be a deterrent for all other Palestinians that want to resist occupation in the manner Ahed has done. You can see this by the fact that she was arrested in the middle of the night and her arrest was filmed by the IDF and the police and was then passed to the press. Even if she doesn’t see herself like [a symbol], Israel is making a special case or symbol from her.”

While the images that Tamimi’s videos have shown are hardly new, the way they’ve spread across the web signals how portrayals of the conflict are evolving with technology. Still, what happens next may be predictable. Though a trial date has yet to be set for Tamimi, the odds against her are not favourable—Israeli’s military court system boasts a conviction rate of nearly 100 percent.